*Student delivers disrespectful messages (verbal or gestural) to another person that includes threats and intimidation, obscene gestures, pictures, or written notes. Disrespectful messages include negative comments based on race, religion, gender, age, and/or national origin, sustained or intense verbal attacks based on ethnic origin, disabilities or other persona matters.

*Bulling is harm intending behavior or a verbal and/or physical character that is typically both unprovoked and repeated.

*Bullying is about power being used by a person over someone who has less power. 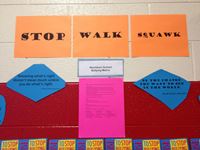 Tell the bully to STOP.

If you receive a "stop" message, "stop".

If you see someone else in a disrespectful situation- use STOP

After using stop, walk away.

If you are helping another person, walk them away from the situation.

Lastly if the stop message does not work, tell and adult.